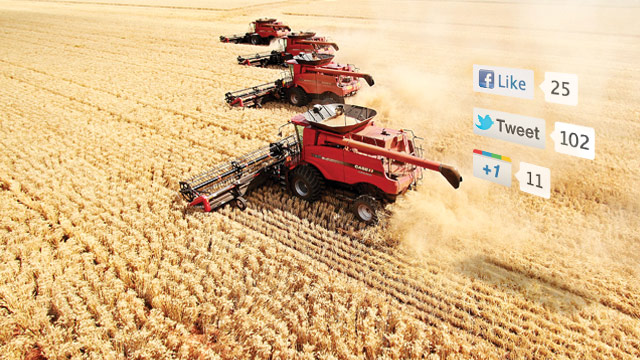 Those who work in the world of farming may feel like the industry is a bit isolating. After all, those in the farming industry often have large plots of land that are a significant distance away from their neighbors. On the other hand, communication has never been more accessible than it is today. Even in rural areas, it isn’t hard to access an internet connection. This means that tools such as social media are sitting right at someone’s fingertips. For this reason, social media has had a tremendous influence on the farming industry.

First, the growth of social media has changed the way society looks at farming. Sadly, there has been a stigma surrounding farming that it is reluctant to embrace new technology. In addition, some people think that farmers treat animals negatively. In reality, nothing could be further from the truth. The fact is that technology has drastically changed the way people work on their farms. Technology is used to decide where and how farmers plant their crops.

Technology also plays a role in how farmers group together certain animals for maximum growth, efficiency, and happiness. When farmers use social media to show society what they are doing on their farms and how they are treating their animals, the stigma surrounding farming starts to evaporate. People start to embrace farming a bit more and are proud of the farmers who make up the backbone of this country.

Furthermore, farmers are using social media to bring more people into the industry. For some people in this country, it might have been three or four generations since someone in their family worked on a farm. This means that people might have a negative view of farming simply because they don’t know much about it. They might not even know the basics of farming. Therefore, farmers are sharing a significant amount of information about their work on social media. This is bringing more people into the industry.

In order for farmers to maximize the positive value of social media, they need to be involved in some of the larges platforms such as Facebook, Twitter, Instagram, and Snapchat. The biggest benefit of social media is that they can network with other professionals in the industry. This might include companies that can help farmers distribute information to the general public as well as partners who can help farmers share their goods and services with potential customers.

The role of social media is to facilitate a dialogue between farmers and the general public who might feel a bit disconnected from the industry. In this manner, farmers can educate their audience about what is actually happening within the industry.

These are only a few of the many ways in which farming has been influenced by social media. Social media has left no industry untouched and farming is included in this. It will be interesting to see how farmers are able to incorporate social media into their everyday work as the industry continues to grow, change, and evolve in the coming years.