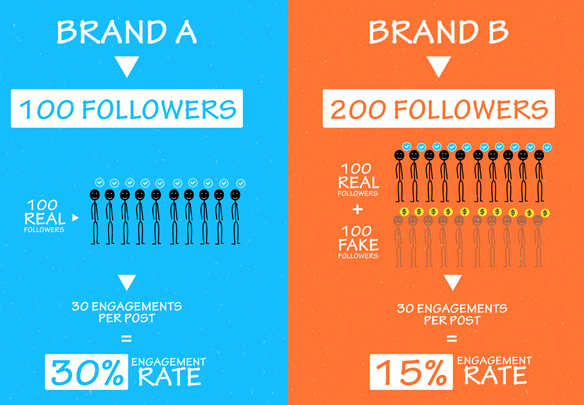 For any brand thinking of developing a social media presence, the first instinct is to get as big as possible. And, if that brand is paying thousands of dollars a month to a digital marketing agency, you can surely bet that they will expect this to happen as soon as possible. But is that really the best strategy to pursue?

In search of the right metric

In many ways, this question can be analyzed as a simple “quality vs. quantity” problem. Either you have a huge number of followers, many of whom like your page and never return again, or you have a smaller number of very passionate followers, who check back every day for new content.
In business, of course, there’s always a race to keep score with the competition, and that’s what makes things more complicated. If your biggest rival has 10,000 Facebook fans and 5,000 Twitter followers, then why can’t you? And this is about more than just a matter of ego – it’s also a matter of credibility.
That’s because the more followers you have, the more “social proof” you have that you are doing something right. This is, in many ways, the type of thinking best associated with the old analog era. Bestsellers were based on a single metric: book sales. Movie blockbusters were based on a single metric: box office receipts. And hit new TV shows were based on a single metric: Nielsen viewership numbers.
Until the creation of the social web, it was theoretically possible to encapsulate the success of your entire business with a single number. And, thus, it’s perhaps no surprise that so many brands adopt that same mentality. They are looking for a single metric to prove they are “winning” – and that metric is # of followers.

But the wrinkle here is that the social web is all about conversations. Your goal should be having people talk about your brand online. And the single best way to measure this is using a metric known as “engagement.” For most brands, this is a way to measure all the likes, shares and comments and determine just how engaged people are.
The higher your engagement, the better your performance will be on social media. Here’s just a simple example: if you post a new item on Facebook, and nobody responds to it, Facebook won’t show that content to anyone else. You might have 10,000 followers or 100,000 followers, and it won’t matter. They won’t see this content because nobody is talking about it. In short, you’re wasting your money on Facebook.
But what happens when you have high engagement? Facebook rewards you by showing your content to everyone else. It doesn’t matter how many followers you have, because even a tiny core group of brand fanatics can get your content shared with a much wider audience.

The link between engagement and ”going viral”

This is how movements and viral trends tend to form overnight. One example was a private Facebook page set up by a few women during the 2016 presidential election. They planned to dress up in Hillary Clinton-style pantsuits to vote in November. Well, so many women thought it was a good idea that it became a national sensation almost overnight. Hillary Clinton herself even referenced this “secret Facebook page” in her concession speech.
That’s why engagement is so important. In political terms, it’s all about “activating your base.” If you have a strong, loyal base, you can accomplish things that simply aren’t possible otherwise. Sure, having a lot of followers is a quick way to show “social proof” that you’re popular. But if you want to walk the walk and not just talk the talk, then you also need to show engagement.

See also  The Case For And Against Using Facebook Video For Marketing
Previous Post
The AIDA Model: A Proven Framework for Converting Strangers Into Customers
Next Post
19 Strategies for Creating a Sales Proposal that Closes for You [Infographic]