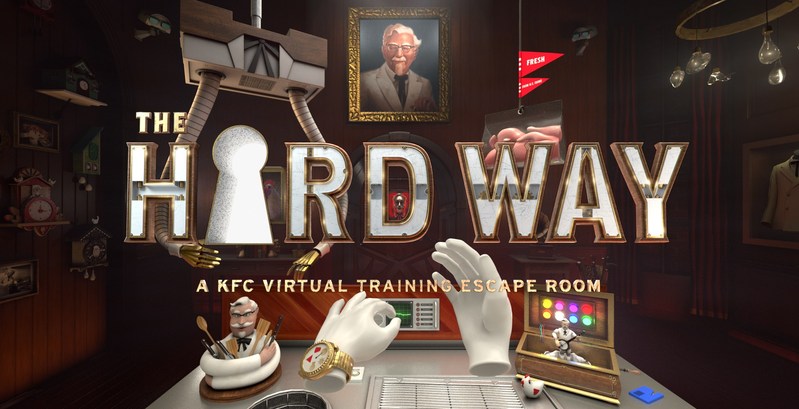 Virtual Reality, gamification, employee training, and fried chicken…These are not things that would usually go together. But leave it to the iconic brand KFC to bring us yet another “un-usual” marketing idea to whet our appetite for its product. Whether it’s an ever-changing lineup of Colonel Sanders spokesmen in its recent television commercials—or even sending one of its chicken sandwiches into space, KFC is determined to keep its 70-year-old brand relevant in the age of AI and VR.
And according to George Felix, KFC’s Director of Advertising, the Colonel remains central to KFC’s current marketing initiative. KFC has just rolled out a virtual escape room used to train staff in the food preparation method that Colonel Sanders, himself, developed over 70 years ago (he called it “The Hard Way”). Using a VR headset, staff are guided through the process of preparing KFC’s Original Fried Chicken under the watchful eye of the Colonel. Would-be cooks must adhere to a strict 5-step process before they can exit the food preparation room.
“The best person to teach staff how to cook Original Recipe Chicken is Colonel Sanders,” says Felix. “Through the magic of VR technology, we’ve been able to bring the Colonel back in a fun and engaging way that really supplements our training, pride, and excitement for the KFC brand,” he adds.
KFC’s advertising is designed to enhance the brand and to drive sales. By incorporating the latest technology in its internal marketing strategy, KFC is hoping to attract the attention of a younger audience—both from a staffing perspective and also from a consumer standpoint. As KFC becomes known as an innovator in the quick service food space, this can translate into new customers who are eager to embrace and identify with forward-thinking brands (even brands that are over 70 years old!).
Felix is quick to point out, however, that in marketing, technology must be in the service of strategy—and not the other way around. He advises other companies that may be contemplating an innovative, tech-based marketing campaign to focus first on the brand challenge, and then figure out how the technology can help solve that problem. He also recommends working with trusted, knowledgeable partners and to be willing to make some mistakes along the way (as long as there is a solid framework supporting your efforts).
You can learn more about the KFC virtual training room, how it was developed and even hear from the head chef for KFC, “Chef Bob”, in the podcast below—from Social Media Explorer’s Drew Neisser. (That’s Drew in the photo below— he’s the one preparing fried chicken with the VR headset!).