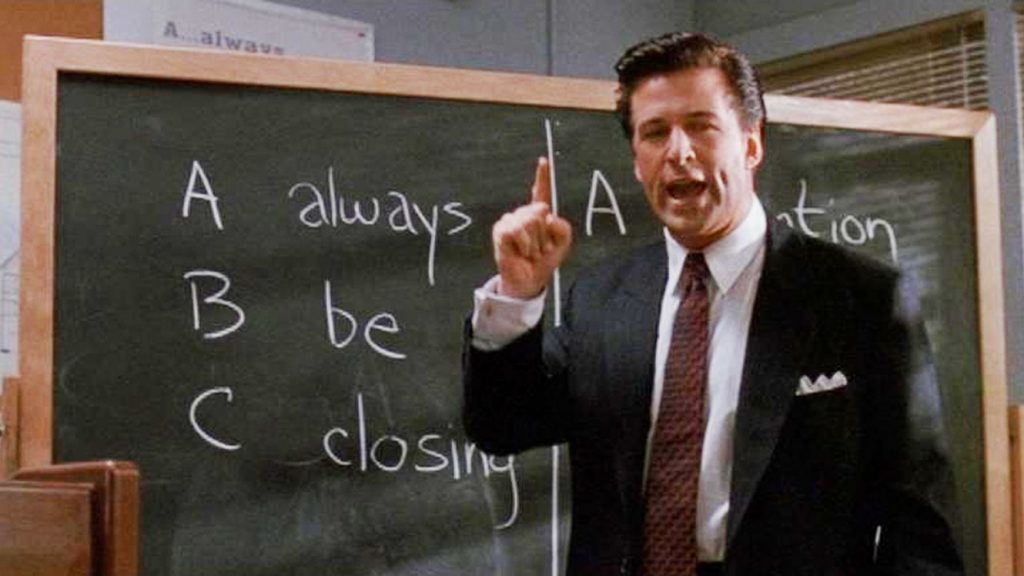 From the iconic Fuller Brush man lugging a suitcase of merchandise in the 1940s, to a slick young corporate raider trading stocks in a modern brokerage firm, Hollywood has romanticized the art of selling since films were first invented.
There’s something inherently gripping about the psychological chess game between buyer and seller that audiences respond to.
So whether you prefer comedy or drama, you’re bound to enjoy a few movies on this list … and that’s a money-back guarantee.

The Best Sales Movies of All Time

Click the titles below to jump to trailers and overviews of the must-see movies on this list.

Kurt Russell plays a hotshot used car hustler who dreams of running for state senate in Robert Zemeckis’s outrageous sales satire. Personifying every crooked cliché of the trade, Russell’s quick-talking charm and effortless charisma gives this hilariously raunchy comedy an energy that’s as effective today as it was 35 years ago. With little more than a high-wattage smile and a bucket of auto primer, Russell turns his character’s often-repeated motto “Trust me!” into a mantra that every good salesperson would do well to perfect.

This Emmy-winning adaptation of Arthur Miller’s landmark play premiered on CBS as a made-for-television movie. Brilliantly supported by John Malkovich and Stephen Lang, Dustin Hoffman’s deeply moving portrayal of the doomed Willy Loman brings Miller’s grim parable to tragic life. Using door-to-door sales as a metaphor for the failure of the American Dream, “Death of a Salesman” is a heartbreaking portrait of a man whose inability to change proves his undoing.

Three years before he taught the phrase carpe diem to the students in “Dead Poets Society,” Robin Williams gave a powerful performance in the ironically titled “Seize the Day.” Playing a middle-aged Jewish salesman struggling with poverty and divorce in the 1950s, Williams captured every nuance of Saul Bellow’s classic novel. Heartbreaking and emotionally raw, this bleak portrait of a man whose natural sales skills fail him at the worst possible moment was originally broadcast on PBS television.

Diane Keaton stars as J.C. Wiatt, a self-proclaimed “Tiger Lady” who’s so focused on work she barely has time to breathe. When she inherits a toddler from deceased relatives, this high-powered management consultant learns that raising a child requires more tenacity than negotiating a million-dollar contract. After losing her job and buying a ramshackle farm, the overstressed Wiatt discovers her true calling when she starts selling her own brand of organic baby food. A warm-hearted tale of entrepreneurial ingenuity, “Baby Boom” demonstrates that, in business and in life, a setback can be an opportunity in disguise.

Barry Levinson’s nostalgic dramedy about two rival aluminum-siding salesmen beautifully evokes the early ‘60s with flawless art direction and rich characterizations. Depicting the moment when Baltimore’s newly formed Home Improvement Commission cracked down on corrupt sales practices, “Tin Men” captures the end of an era with honesty and humor. In the film’s witty coda, our disgraced heroes drive off into an uncertain future, while a familiar set of golden arches being erected in the distance signals an important new business venture on the rise.

With blistering intensity and savage dialogue, David Mamet’s misanthropic masterpiece about a group of desperate salesmen in a Chicago real-estate office introduced a phrase that strikes fear in the heart of anyone who ever tried to finalize a deal: “Coffee is for closers.” Playing the manager in charge of doling out prospective sales leads, Kevin Spacey’s cold-blooded smarm has rarely been more effective. But it’s Al Pacino’s Oscar nominated portrayal of smooth-talking Ricky Roma that steals the show. Watching him manipulate a naïve client into buying acres of worthless property is both horrific and exhilarating. As Mamet’s cautionary tale makes painfully clear, sometimes you’ve got to sell your soul before making a sale.

Chris Farley’s physical humor and David Spade’s scathing sarcasm helped make this raunchy comedy about a lovable moron on a quest to save his family’s factory a surprise box office hit. But beneath the fat jokes and gross-out gags, “Tommy Boy” actually depicts the birth of a successful salesman. Tasked with generating enough new business to keep his company afloat, Farley gradually learns that connecting with customers depends on more than fancy slogans and firm handshakes; it’s about listening to their needs and responding with genuine humanity. Also, it helps if you don’t accidentally set their desks on fire while screaming “Holy Schnikes!”

Three years after his Oscar nomination for “Jackie Brown,” Robert Forster delivered one of his finest performances as Eddie Miller, a veteran traveling jewelry salesman whose recent heart attack forces an early retirement. Charged by his firm with training a younger replacement, an unlikely friendship develops between the cross-generational partners, culminating in their unexpected visit to a rundown massage parlor, where a second chance at love just might await our widowed hero. Part road movie, part character study, the little-seen “Diamond Men” is a gem waiting for rediscovery.

Loosely inspired by the real-life career of a notorious weapons dealer, “Lord of War” posits that selling AK-47s to African warlords isn’t that much different than selling orthopedic shoes to senior citizens. Ultimately, it’s all a matter of treating your customer with respect. Charting the rise and fall of a small-arms dealer who moves from distributing handguns in his New York City neighborhood to delivering guided-missiles to rogue nations, this darkly comic thriller stars Nicolas Cage in one of his most fascinating roles. Clinging to the idea that he’s merely supplying a demand, Cage’s weary merchant of death eventually confesses that he’s not in it for the money; it’s simply something he’s good at.

While “Death of a Salesman” uses the sales occupation as a symbol of futility, this inspirational drama presents it as a positive, life-changing profession. Will Smith earned an Academy Award nomination for his role as Chris Gardner, a fitfully employed salesman who finds himself and his five-year-old son homeless after a series of unlucky financial breaks. Landing an unpaid internship at a brokerage firm, the film tracks Gardner’s unwavering pursuit of a better life, despite constant setbacks and difficulties.

Based on the nonfiction memoir Hard Sell: The Evolution of a Viagra Salesman, this romantic drama stars Jake Gyllenhaal as an ambitious pharmaceutical rep whose slippery ethics and refusal to take no for an answer help him become Pfizer’s #1 drug pusher. Though marketed as a love story, it’s the film’s unique look at the competitive world of medical sales that makes it worth watching. Whether flirting his way past nurses or bribing doctors, Gyllenhaal’s puppy-dog charm causes us to root for him, despite the morally dubious practices of the industry he’s working for.

Fans of the TV show “Parks and Recreation” will enjoy this low-key laugher about insurance salesmen; but anyone who’s suffered through an interminable business convention will relate to it as well. Funnyman Ed Helms plays Tim Lippe, a naïve insurance man who’s so sheltered and innocent that he’s never spent the night in a hotel before. Sent by his company to an important convention in the “major metropolis” of Cedar Rapids, Iowa, Tim’s innate positivity has a transformative effect on the cynical salespeople he spends the weekend with. A modest yet engaging comedy about workplace camaraderie, “Cedar Rapids” is well worth visiting.

This Oscar-nominated film tells the true story of Billy Beane (Brad Pitt), the general manager of the downtrodden 2002 Oakland Athletics baseball team. With a tight budget and the help of recent Yale economics graduate Peter Brand (Jonah Hill), Beane pioneers the sabermetric approach to baseball recruiting. Throughout the film, Pitt’s Beane must sell his scouting staff, management team, and own players on his unorthodox approach to building the team. It’s a story of big bets, questioning the status quo, and turning meagre resources into big results — something all salespeople have encountered at one time or another.

“Joy” is a film about legendary entrepreneur Joy Mangano. The film picks up with Joy, played by Jennifer Lawrence, as a divorced mother of two working as an airline booking clerk. Mangano gets her big break when QVC offers her self-wringing mops a spot on one of their telethons. Unfortunately, the spot flops due to a salesman’s poor execution. Mangano fights for the chance to star in the infomercial herself and success soon follows. “Joy” is further proof that hard work, sacrifice, and an intimate understanding of your target audience are all part of selling your way to the top.

Ray Kroc is the 52-year-old milkshake machine salesman who built a fast food empire. “The Founder” tells the story of Kroc’s partnership with Dick and Mac McDonald, and his subsequent franchise and takeover of their family burger business. Michael Keaton’s Oscar-nominated portrayal of Kroc isn’t always likable, but it’s a display of the “whatever-it-takes” mindset that has skyrocketed more than one entrepreneur to success. It’s also sure to leave you craving a cheeseburger.